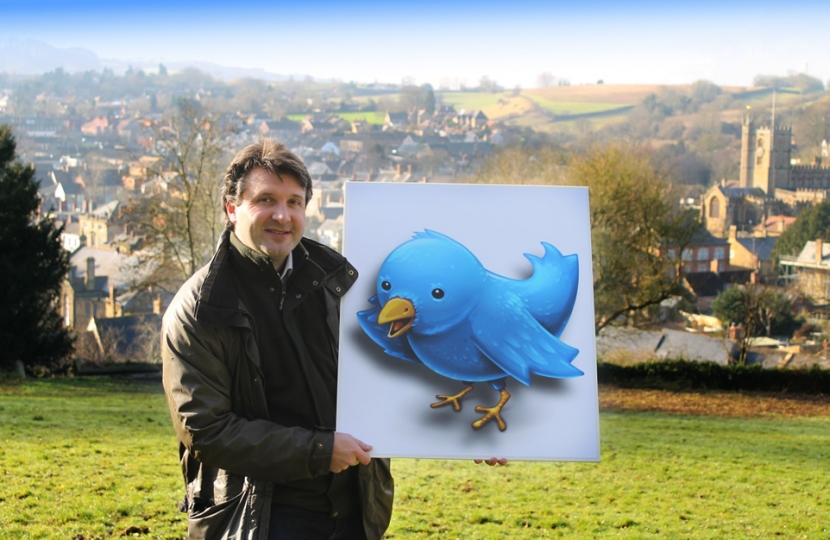 Marcus Barrett, local campaigner and Conservative County Council Candidate for Crewkerne & Misterton, has pledged to use new ways of keeping in touch with local people, if elected in May.

Marcus, pictured with a giant ‘Twitterbird’ at Crewkerne’s Bincombe Beeches Local Nature Reserve where he is a volunteer, is keen to use fresh ways to help local people and thinks many people do not get enough information about what Somerset County Council actually does with their money.

Marcus, who has ‘tweeted’ for several years as a campaigner, sees Twitter as just one way to keep in touch, and says it helps him meet lots of people in person around the area. “Our Taunton-based County Council costs over £333 million of taxpayers’ money to run each year. So, any way local people can find out what their councillor is doing or thinks about a local issue has got to be helpful. And Twitter is free to use.”

An internet entrepreneur himself, Marcus is keen to use new ways to support local people of all ages: “According to recent statistics, nearly a third of all those who use the Internet, now use Twitter; half of all Twitter users are viewing it on a mobile phone, so it means a lot of people can get in touch with you really quickly – it’s great for local democracy.”

Marcus has ‘tweeted’ recently on safer roads in Crewkerne, the wind turbine debate and using Crewkerne’s historical past for better tourism. Marcus also uses a different Twitter account in his role as a teacher of English language and linguistics, to get snippets of interest across to students who might otherwise miss linguistic stories - like when English footballers start talking unconsciously with a French accent.

Marcus sees his use of Twitter as just one of many fresh approaches he would bring if he became a councillor: “Hearing from people and getting information to people are key issues in local politics – using Twitter and blogging is just one way of doing that, it’s part of the modern mix I would bring to being a councillor.”

“I’m keen to do things differently. It’s not just about being online. I would hold regular drop-in chats in a range of different locations around Crewkerne and villages – it’s important people know how to come and see their councillor in person as not everyone wants to email, write or phone in.”

“As a local campaigner, I use social media to keep people up-to-date but there’s a bigger job to be done in pressing for Crewkerne’s further economic development, something I’ve been doing with the Chamber of Commerce for many years and in my own small business.”

“Getting jobs into our town is not about spending more taxpayers’ money, it’s about getting people together, backing small businesses and promoting the things our area offers – and social networking online has a part to play in all that.”