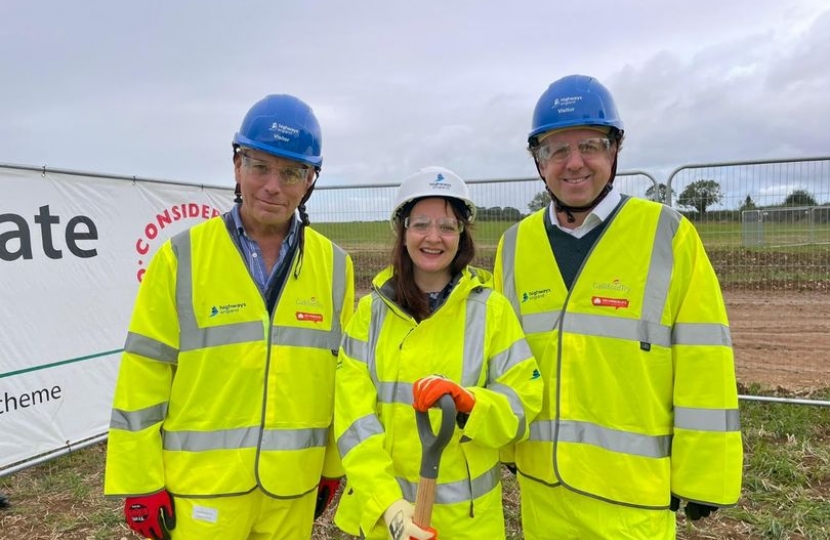 It was a brilliant moment to be with Highways England last week for the start of works on the dualling of the A303. Much in my thoughts were all the local people who for many years have campaigned to make this much needed upgrade a reality. Some said it would never happen but here we are doing it and it shows just how committed the Government is to levelling up the South West and backing the creation of local jobs and prosperity at the same time as improving safety and quality of life for visitors and locals alike.

Great news also this week that Numatic are expanding their operations in Chard with a £30 million investment. Those who know them know that Henrys and Hettys are the best vacuum cleaners around and it’s fantastic that we will be making more of them right here. I also have a meeting with Council Officers soon to discuss localised flooding problems in Chard and how to make progress in fixing them.

Party Conference season tends to focus the media on big national issues of the day and, whilst I am not always a huge enthusiast for party political messaging as I think local needs are more important, I do think it’s good to have them back.

Actions speak louder than words though and perhaps the biggest example of that is Priti Patel and the Home Office taking action to get control of the illegal channel crossing situation. It is not news that those seeking asylum should do so in the first safe countries they reach and there is no legal basis for refugees crossing the Channel in dangerous craft. It does not matter where you stand overall on the issue of immigration; we need to get a grip on this, not least because as the weather gets worse it becomes more life-threatening for those involved.

Smaller fringe events at conferences can provide interesting discussions from experts and elected officials (some are even both) and there have been some important ones concerning the economy and environmental targets and how to achieve the outcomes we want in both areas. There are some great challenges around the net-zero agenda which need to be an honest part of the discussion. One of these is the estimate that we would need battery storage capacity costing £4.5 trillion to cover days when the wind does not blow, and the sun does not shine if we don’t have reliable grid base load provided by relatively clean gas and nuclear.

The pandemic has been an awful time but hopefully a one-off. The Government stepped in and saved a huge number of lives and jobs, but it would be wrong to take from this that intervention and micromanagement are sustainable answers. The costs are certainly unrepeatable, and it is right that we set a navigable course for the public finances. As part of that I will continue to argue for supply side reform that allows investment and the productive capacity of everyone taking part in the economy to flourish. It has been great to see that becoming a reality through investment in local skills and infrastructure and investment incentives like the super-deduction.

It has been good to see some practical agreements reached in the early stages of the COP26 conference on the environment in Glasgow although serious work still needs to be done on how to transition to a lower carbon economy without impoverishing people.