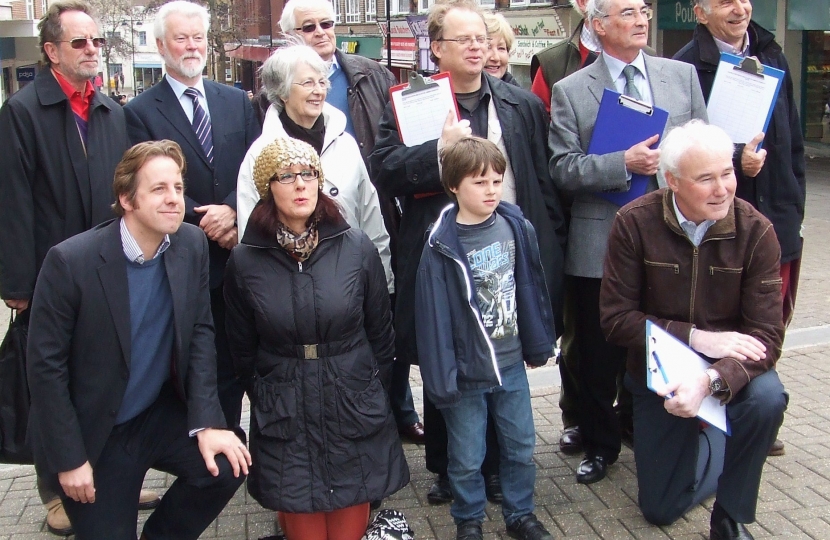 The petition was arranged by Tim Newark from the Tax Payers Alliance to highlight the rise in car parking charges planned by South Somerset District Council and the affect on local businesses. The increase would see customers paying to park at evening and weekends and comes at a time when High Streets throughout South Somerset are struggling to survive.

The charges would put people off coming into the town for shopping and entertainment. The Quedam shopping centre alone appearing to have 25% of its shops closed or empty, each one a sad story for the owners, former staff and customers.

At a time when there is a national focus led by Mary Portas, the governments retail guru, on the dilemmas faced by our High Streets how does South Somerset District Council respond?

“At a time when the retailers and public are looking for help from their District Council it appears the District Councils priority is looking after itself and its high spending regime. The Council still plans to spend in excess of £800,000 on an artificial grass hockey pitch, £180,000 on unsecured loans to gypsies and travellers, over £500,000 annually on its top 4 ½ employees (one part time) and pours somewhere approaching half a million pounds annually into the Octagon theatre. It’s a question of priorities and the District Council has got theirs wrong.”

The action day was very well supported, many signatures collected, the results and a report will be posted on the Tax Payers Alliance web site.